When an email from the highly talented Dan O’Brien pinged into my inbox, I opened it with some considerable  excitement. It announced Dan O’Brien’s latest project: Mobsters, Monsters & Nazis, which is  a collaboration between Dan O’Brien and Steve Ferchaud. Steve, of course, illustrated Conspirators of the Lost Sock Army and the Loose Change Collection Agency. Imagine my surprise when I discovered that Dan is in the process of publishing something rather different…something visual, beautifully illustrated, with an intriguing storyline and an attention-grabbing title.

How could I not take part in the promo blitz for this new project? So I give you today:

Author Dan O’Brien has teamed up with artist Steve Ferchaud for a one-of-a-kind reading experience that will span six short books. Blending noir, hardboiled detective stories, and pulp comics, “Mobsters, Monsters & Nazis” follows private investigator Derrick Diamond as he searches for an elusive object: a strange device that the Nazis need for their nefarious experiments. Aided by Ava Harpy, a lounge singer at the Yellow Monarch, they dive deep into the underbelly of the city, uncovering a sordid plot that is much larger than they could have possibly imagined.

Now, it might not be a time travel highlander romance, but it is the first in a series of kindle ebooks that might have a time traveler in them (or maybe not). Dan can promise it’s a modern pulp story with the usual suspects of pulp heroes and villains. It also manages to satisfy all those readers who enjoy a little cthulhu mythos in the mix.

If you love illustrated works, pulp comics, and a little bit of Lovecraft in your stories, then what are you waiting for?

Today I’m taking part in the reveal of the sketches for some of the interior illustrations (which will be black and white) of the first issue. It will be released as six issues (eBooks) starting on Halloween. It is influenced by film noir, pulp comics, and an abiding love of Lovecraft. And! *Newsflash* It is already available for pre-order, and Dan will be promoting it heavily starting in the month of October. He would love to hear what you think of it so far! (And so would I!) 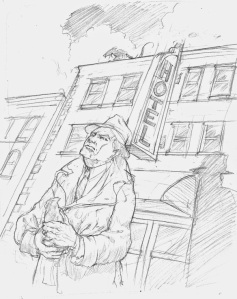 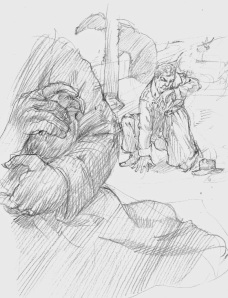 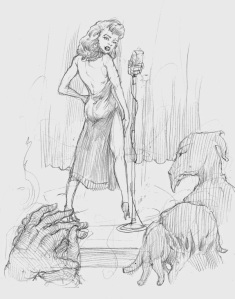 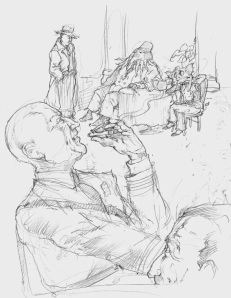 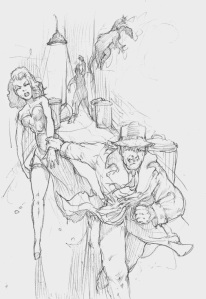 So let’s hear it for Mobsters, Monsters & Nazis: What do you make of the sneak peek and the idea?

Huge thanks to Dan for sharing, and good luck with the launch!!

This entry was posted in CentreStage and tagged CentreStage, Dan O'Brien, Illustrated, Pulp. Bookmark the permalink.