When in France, do as the French do. Right? So during our recent family holiday to France, we picked up a new eating habit. We stayed with some very good friends and their kids and were quickly absorbed in a very different approach to eating and mealtimes. Astounding, really, how a little cultural and geographic difference can foster so much diversity.

Anyhoo, the aspect that amused and confused us most in equal measures to begin with was the salad course. Obviously, being well conversant with restaurant etiquette, both hubs and I were aware that apparently some people like a salad before their meal. However, salads aren’t normally the kind of starters we’d order, both of us being more of a prawn/paté/bruschetta person. As for the kids… *snortles*

But there we were, being given our greens before every meal apart from breakfast, obviously. The salad course seemed a little alien at first but quickly became an enjoyable habit. And the best thing? The kids ate their salad too. Not all of it, by any stretch of the imagination, but green leaves, tomatoes, raw peppers, cucumber and all manner of other crudités were being consumed by my green-adverse offspring simply because there would be no second course until the first one had been cleared.

The leaning tower of salad… Getting ready for the salad buffet can be entertaining!

The logic is obvious. Everyone sits down to a meal hungry. Faced with a choice of nothing or something green-and-healthy (“eeek!”), “nothing” is infinitely less appealing than “green-and-healthy”. Reluctantly but without complaint, green-and-healthy is being eaten in a kind of communal rite-of-passage before the main event. Everyone eats green stuff, therefore there can be no complaining. Nobody is being singled out. Nobody faces their green demons alone. We’re all in the same green boat.

We call it eating our frog–a novel interpretation, perhaps, on time-honoured advice supposedly first formulated by Mark Twain, but absolutely fitting considering where we picked up the habit. And guess what? We’ve kept it up for weeks and weeks now. Okay, I’d be lying if I claimed I put a salad course on the table every day. Some days are simply too hectic, what with a twenty-minute turnaround between school and music lessons or some such. But most days have a salad course, and the ensuing main meal is so much more relaxed because the kids have already eaten their greens and can actually simply enjoy the rest of their food without parental nagging by way of, “come on, just four more peas.” 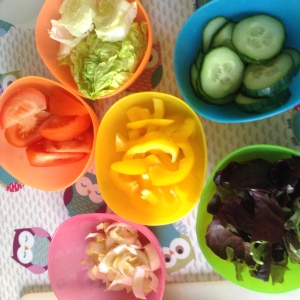 A sample salad buffet. The rule is: everyone has to eat something out of every bowl except one. Salad dressings are available but optional… each to their own!

What about the winter, you ask? Good question. I’m sure we’ll stick with the crudités for some time yet; courtesy of global markets, cucumbers, peppers and such like can be bought any time of year. And perhaps I’ll experiment with vegetable bakes and rissoles during the colder winter months. And obviously a good old-fashioned roast lunch will always come with vegetables, salad course or not. But still: we will keep eating our frogs. Long live the salad course!

Over to you. What do you think of eating your frog?