CentreStage with Cat Lavoie: Introducing “Zoey & the Moment of Zen”

It’s my enormous pleasure to introduce you to a new friend I recently made in a fabulous Facebook group. Give it up for the one and only Cat Lavoie! Cat has recently released her new novel, Zoey & the Moment of Zen. She’s sharing with us today the blurb and… *Nicky cheers very loudly indeed* Zoey’s playlist!! Read and be ready to be wowed!

Zoey & the Moment of Zen

When coffee shop owner Zoey Everwood takes her obsession with ex-boyfriend Braden too far, everyone—except Zoey—is convinced a bit of fun in the sun at the Moment of Zen Wellness Resort will help her get over him once and for all.

But Zoey’s relaxing vacation turns out to be anything but peaceful when she meets Shane Lawson, a resort guest who bears a striking resemblance to Braden. And things get even more complicated when the resort’s owner starts spilling secrets about Zoey’s aunt Nessa, the woman who raised her. Add a snarky Wellness Coordinator and Nate Holmes—Shane’s grumpy friend—to the mix, and you’ve got the recipe for a perfect tropical storm.

When Zoey comes back home with a new husband instead of tacky souvenirs, she must convince everyone she hasn’t completely lost her mind. As Zoey and Shane struggle to keep the magic alive outside the resort, Zoey discovers that she isn’t the only one having trouble letting go of the past. And when Nate drops a bombshell that changes everything, Zoey must decide if the old saying is true—what happens at the Moment of Zen stays at the Moment of Zen.

Song that reminds you of someone from your past: “Un-break My Heart” by Toni Braxton. Whenever I hear it, I think about my ex, Braden.

Song you sing at the top of your lungs when no one is around:  “Just Dance” by Lady Gaga. I usually sing (and dance!) along to it when I’m closing up the coffee shop at the end of the day. Thank goodness the customers don’t see my horrible dance moves because we’d probably go out of business really fast!

Song that reminds you of your childhood: My aunt Nessa has developed a love of Mozart and Beethoven in the last few years but, growing up, it was more classic rock than classical music. Whenever I hear “More Than a Feeling” by Boston or “Roxanne” by The Police, I remember sitting in the passenger’s seat of her car and singing along with her.

Favourite karaoke song: “If I Could Turn Back Time” by Cher. But I’ll only sing it if my best friend Dar is on stage with me… and if I’ve had a few cocktails.

Song you know every single word to: Easy. “You Were Meant For Me” by Jewel. I know it by heart—I could sing it right now if you want… No? Okay.

Best song to cry to: “Someone Like You” by Adele. Can anyone listen to that song without tearing up?

Wow. Love love LOVE this playlist, and what a great way to introduce a character. Thanks for sharing, Zoey! X 🙂 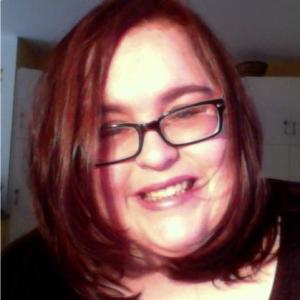 Cat Lavoie was born in the small town of Jonquière in Québec, Canada. At the age of nineteen, she packed up her things (mostly books) and moved to the big city of Montreal where she currently lives with her tempestuous cat Abbie–who is both adorable and quite possibly evil.

An incurable Anglophile since her university days where she studied English Literature, she can often be found daydreaming about her next trip to London. Since she’s an expert at the art of procrastination, Cat is easily distracted by cooking and home improvement shows–even though she’s not particularly good at either.

Cat grew up watching soap operas and legal dramas and–had she not decided to be a claims analyst by day and write chick lit by night–she would have probably become a designer suit-wearing lawyer. Or a character on All My Children (which is what she really wanted to be when she was twelve).

Cat is not sure whether she’s a geek or a nerd–and is afraid she might be both. Cat blogs about the writing life and posts adorable pictures of Abbie over at the Catenabi Chronicles. Come say hello at: http://www.CatLavoie.com and follow @Catenabi on Twitter.

Huge congratulations on your launch, Cat, and thanks for sharing these fabulous songs. I’m all a-rocking here! 🙂

Folks ~ give Zoey, her playlist, and her moment of Zen a warm welcome and let’s hear your thoughts!

This entry was posted in CentreStage and tagged book launch, Cat Lavoie, CentreStage, chick lit, Zoey and the Moment of Zen. Bookmark the permalink.

4 responses to “CentreStage with Cat Lavoie: Introducing “Zoey & the Moment of Zen””