CentreStage with Harriet Grace: How to Make Your Novel Fly

Welcome again to CentreStage!  CentreStage showcases fantastic authors from around the world, often introducing fellow featured authors at loveahappyending.com as well as my fellow authors in the Sapphire Star Publishing family.  On CentreStage, these authors might write for you about their lives, or their writing journey, or anything else that matters to them.  Every feature will be different in format and flavour, so watch out for a variety of stories and tales.

Today, it is my great pleasure to welcome loveahappyending.com featured author Harriet Grace! Harriet brings us a very unique post with hand-crafted, powerful images, and I absolutely adore the drawings!  So over to you, Harriet…

How Make Your Novel Fly? 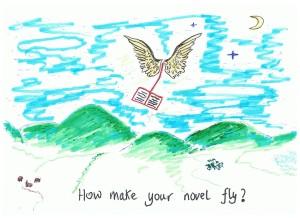 I’ve often wondered how successful novels started.  How did the author choose what to write about?  Was it the characters, the plot, or just the brilliant writing that made it successful?  Set out on the long journey of the novel and people will ask you ‘what are you writing about?’  Do you have a plan?  A synopsis?   But I don’t know these things until I’ve written book!

Over the years I have written 2 novels which found an agent but not a publisher;  completed an MA in Creative Writing and written another novel; found another agent, and nearly a publisher.  I was always at the writing end of the process, trying to create characters, a story, honing the craft of writing novels and wondering whether I was ever going to get to the end.  But I never let myself think about the end, let alone beyond it.  The idea that I might one day have to sell a book of mine, and therefore need to know at least one unique selling point about the book, if not several, was somewhere I wouldn’t go.  It felt like tempting fate.  Such hubris would invoke the wrath of the Gods and I would never see a book of mine in print. 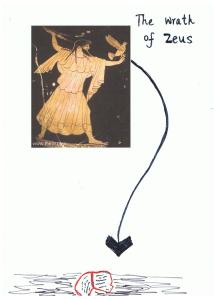 My novel ‘Cells’ started off with an image I had of a woman of about forty sitting at her desk and looking across a busy open-plan office and seeing a young man she has never seen before and making a connection with him.  He looks a bit like Jesus and she feels weirdly attracted to him…  Fairly quickly, the woman at the desk becomes Martha,  Features Editor of a national newspaper, married to Grant.  They both have successful careers and live in a beautiful house in Putney on the river.  The young man becomes Jon, a bit of a loser.

And then – eureka! – I realised that Martha and Grant haven’t been able to have children.  They have tried IVF several times and it has failed, and they are trying to move on.  Suddenly, I had a MODERN DILEMMA (MD for short), although I didn’t realize it at the time, or how important that would be! 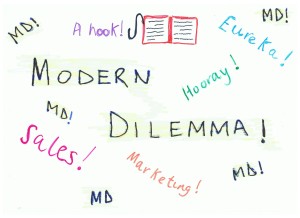 At my launch I said:

We live in an age of amazing medical advances where everything seems possible.  But what happens when the technology fails?  What does it do to people who have tried and tried to have a baby through IVF and failed?  How do they move on?  How does it affect their lives, their relationships?

Looking back, it felt like luck that I’d hit on this MD because it has made the novel so much easier to sell.  I had a hook, attractive enough to win me a reading at the Kingston-upon-Thames Readers Festival. The Head of the MA Publishing degree at Kingston University attended that reading and invited me to talk to her students about self-publishing, and then included me as a case study in her on book on self-publishing ‘The Naked Author’.  The MD helped me get reviews, was useful in press releases, on Twitter and Facebook, and as introductions to readings.  It appears that many women, like Martha, have gone through this experience.

So, here is me pretending to be Martha walking across the footbridge near her home at Putney.  We used this image for the cover of the first edition.

Here are the patterns in the river, which Martha gazes at and which to Martha look like cells.  Cells which refuse to fuse together to make a baby. 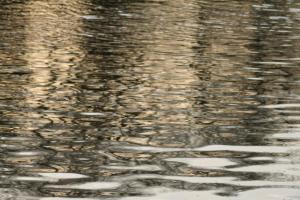 How do other writers choose what to write about in their novels?  Are they influenced by fashionable genres or subjects, or world events?  Do they write a plan?  A synopsis?  A strapline for the key idea the book is about?  Or do they just create characters they are interested in, get into their world, their story, and hope that the story picks up the Zeitgeist of the moment and makes the novel fly?

I would love to hear your comments…

Well–what can I say? Thank you for this amazing post. The ‘MD’ of your novel is something that I have seen a few of my friends go through–and it is tough. I love the swirling river imagery, that’s very powerful. I am eager to hear how readers find their inspiration for writing!

Let’s find out more about Cells, first of all!

CELLS – One woman, two men, a last chance for happiness

Peak time on the Features floor of a national newspaper and the computers crash.  Martha Morgan, Features Editor, has a migraine and is losing control of her job.  Head pounding she sits down, looks up and there is Jon, one of the messengers; and for a few seconds he seems like a saviour.

Martha is married to Grant, a successful analyst.  They have a beautiful home but no baby, in spite of IVF.  Jon, brought up by dysfunctional parents, can’t stick at a job or find a girlfriend.  When Martha decides to take him under her wing and invites him into their home, the lives of all three of them break open, bringing the past and present into an explosive future.

Cells is available on Amazon.co.uk and Amazon.com in paperback and Kindle; through bookshops; and directly from the publisher, SilverWood Books.

And now let’s find out more about Harriet Grace, Author:

Harriet Grace grew up in a small village called Inkpen (Inkpen features in the novel).   She has grown-up children and stepchildren and now lives in London.  She has an MA (Distinction) in Creative Writing and has had poems published.  Cells is her first novel.

Now, dear reader, remember to let us know how you go about finding inspiration for your novels… Just how do you make your novels fly? We’d love to hear from you!

34 responses to “CentreStage with Harriet Grace: How to Make Your Novel Fly”