CentreStage with Miriam Wakerly: Writing with a difference since she was eight…

CentreStage showcases amazing authors from around the world who may share with you stories about themselves, their writing or their lives. We have seen all manner of features on CentreStage so far but one thing is certain: there never is a dull moment here.

Today, it is my great pleasure to introduce fellow loveahappyending.com author Miriam Wakerly! 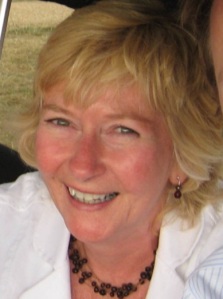 Miriam tells us something about her years as ‘wordsmith’ … Over to you, Miriam! First of all, do you think writers are born or made?

From listening to other writers and reflecting on my own experience I sit firmly quivering on the fence with this question. Surely it has to be a combination of both? The urge to write, or make things up, seems to come at an early age and the stronger this is the more effort that person may put into developing any inborn talent. But it doesn’t seem like an effort. It’s as if you can’t not write!

On the other hand neither parent nor teacher can force a child to like books, but rather encourage and provide opportunity, I guess. I think all children have a pretty lively imagination.

My parents told me that as a small child I was always happy with my own company. I was good at occupying myself. Now there may be many reasons for this – lack of other children to play with, a mother who was suffering from depression, just one sibling – my sister ten years older than me. Perhaps I sought out the other worlds that books could offer, but certainly I loved to read and write as soon as I could. Once I discovered it, the tiny local library was a haven of pleasure; I gobbled up books and was always good as essays, compositions and stories. When asked what I wanted to do when I was grown-up, I would say, when around 8 years old, that I wanted to be ‘an authoress’ – or a bus conductress. Perhaps my inspirational role models were limited!

I doubt they were limited! I love the way you describe your love for books and your library haven. It sounds like a magical escape world.  So, how did you move from the pleasure of reading to the pleasure of writing? Tell us a bit about your writing life.

My first published article was in the School Magazine. I was 13 and this was the first issue; it was a new venture and I was the youngest contributor. It opened like this:

‘I am in love. Yes – he is dark, handsome, has good looking features and dreamy, brown eyes – and a wet nose!’

Cringingly embarrassing, but yes, it was about our black Cocker Spaniel, an account of his funny antics and achievements. From this you might think I was born to write really bad romantic comedy.

No, no, no! I adore this opening line, nothing cringeworthy about it. But do tell… did you write rom-coms?

I reckon almost any fiction, including mine, needs to make the reader smile now and then, but not necessarily laugh out loud. I admire any writer who can keep the comedy bubbling along from cover to cover! Certainly I did write what may be described as romantic fiction. I had a go at Mills & Boons years ago, but I think it was with the idea of making a fortune, not because it was really my kind of book. I never quite managed that working-to-a-formula-but-giving-them-something-different-thing. 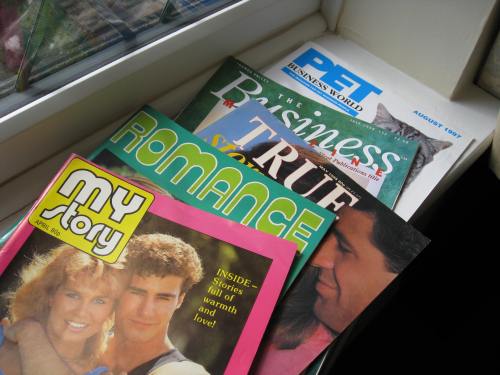 But I did get many stories, with titles like ‘The Eye of the Storm’ and ‘Love Turned Sour’, published in magazines such as My Story, Romance and True Story. I don’t think they exist now, but I became a ‘regular’ and was paid around £80 per story in the 1980s. Looking back, not a bad rate, really! I did this when my three children were growing up and I was working odd days as a supply teacher, doing the Mumsy juggling thing, spinning plates and so on. My first ever published story was in Christian Herald! 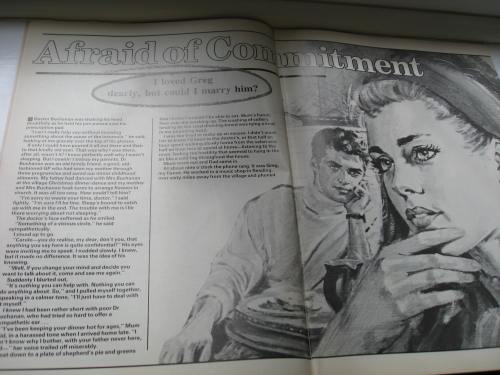 The magazine editors never notified me – it was always exciting to call at the newsagents and flick through the pages to see if a story was in that month. Then a while later I would get my cheque in the post.

That is amazing! What a revelation. I’ve tried to read the feature above but my eyes aren’t good enough… You’ll have to send me a hardcopy! But I hear you wrote more serious articles, too?

Writing articles was part of my training ground. I always knew I loved writing and tried my hand as a freelance, building up a portfolio to help get PR work for companies. So at first the articles were about things I knew a little bit about: Does your Garden have Acid Soil?  in Popular Gardening; Wasn’t My Face Red? About embarrassing moments with toddlers, in Under-5 magazine (Playgroups organisation). A humorous account of a sailing holiday that went into Woman’s Realm; that kind of thing.

Ooooh, I feel an anthology coming on. Can you have an anthology of your own articles? Anyway, some kind of collection: Miriam’s views on life, the universe and everything?

Well, after various proper jobs in the real working world, I set up my own PR and Marketing company – just working solo, writing press releases, feature articles, product and company brochures, and later, words for company websites. One company marketed boilers and radiators; as well as the more technical stuff, I wrote some ‘fascinating’ case studies about the buildings where their products were installed, like The Royal Courts of Justice and the Grand Hotel in Brighton. Here’s some other titles: ‘Varroa Disaster Won’t Go Away’ – an article on bees in Farmers’ Weekly; Cat Allergy and Cat Owners in Pet Business World; Odour Busters – on pet smells in the house;   There were many others. See what I mean? But the subject matter got even more unlikely!

Later I just focused on projects for IT companies dealing in software, connectivity and other technological advances – with over 30 clients in total. This was the commercial sector most in need and the most lucrative. So, after much deliberation and digestion of boring technical matter, I put together articles like: Hidden Structure – article on cabling in Premises and Facilities Management; and Why Doesn’t the Lift Work? This was an article on the perils of Y2K! Remember that old ‘millennium bug’? No, it would be too, too terribly boring to tell more of this. There were more! You don’t want to know.

I do! This kind of stuff fascinates me. Really! And… it’ll go right in your collection of articles about just about anything! 🙂 But I interrupt again, I’m sorry. You were saying…?

Suffice to say that after a few years, not surprisingly, I had a really desperate urge to do something completely different, which I did. And, of course when would I get that novel written?

Aha! Had you written a novel by then?

Not sure when I started but for sure I wrote two or three – the usual rejection story. Skip a few years, then I launched my first novel, Gypsies Stop tHere the day after I retired in 2008; the sequel/prequel No Gypsies Served in 2010 and this year Shades of Appley Green – a modern village novel. How that all happened is another story …

So it took a few years, overall?

You could say that. But all those years I was writing, writing … maybe I was born that way, I don’t know! But certainly I’ve had a lot of practice at putting words together – sometimes even in the right order.

Wow, Miriam–you make me laugh. And I stand in awe! What a wealth of writing and being-published experience you have… This is a truly amazing feature, thank you so much for sharing!  (And I await your anthology with bated breath!) Now let’s find out more about your novels. First of all,  Gypsies Stop tHere and No Gypsies Served: 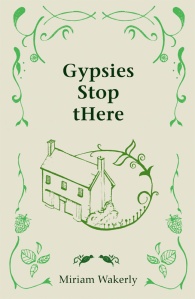 Will uprooting herself from London to live in the country help Kay escape guilt-ridden memories of her husband’s death? Far from finding a quiet life, she is caught up in an age-old village conflict where passionate opinions on Romany Gypsy Travellers divide the local people.

A young woman, Lena, enters her life, unwittingly putting Kay’s plans on hold. Kay struggles to not only come to terms with her emotional past but also to resolve Lena’s problems, those of the village and the Gypsies. And another relationship blossoms that she would never have dreamed of… 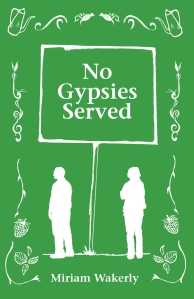 No Gypsies Served, published 2010, sequel/prequel to Gypsies Stop tHere

Two years have passed since Kay successfully campaigned for the Appley Green Gypsy Site, and four years since her husband was murdered. Life in the village was going so well, until the phone call and letter. Then comes the disastrous site opening. Worst of all, Dunstan, whom she realises is her best friend and ally, is giving her the cold shoulder for some unknown reason.

Dunstan is taking an emotional trip down memory lane, into childhood as a Gypsy on the road, and his eventual break from his people. Why is he so angry with Kay that he keeps away from her? Chances of a longed for reconciliation look slim …

And then, changing gears slightly… Shades of Appley Green, a modern village novel, set in the same village but the first of a new series: 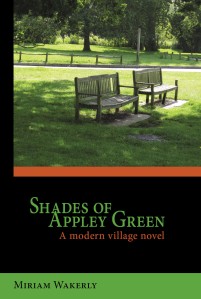 Steph is a special, but troubled young woman. Chosen by the most venerated man in Appley Green to fulfil his mission, she feels publicly admired rather than privately loved. She certainly does not trust men!

In helping a once famous, elderly architect with Parkinson’s regain a social life, she finds herself taking personal risks, fending off objections, blind to danger. We wait for the moment when it dawns on Steph what is driving her deep-seated obsession, for only then can she find the happiness she deserves.

Appley Green is a charming English village. Everyone says so. But people are still people. With the emotional turmoil that comes with love, birth and death, a close-knit community can harbour betrayal and guilt, as well as joy and laughter.

You can find all of Miriam’s book on Amazon in paperback in Kindle editions.  You can also visit Miriam on her blog, or find her on Facebook and Twitter. Go on, don’t be shy! Miriam loves a good natter, and, as you saw, she can talk about almost anything……

So, my friends: here’s an author in Miriam who’s not afraid to tackle unusual, potentially controversial topics. What have you up your sleeve that is different and waiting to be written? Have you got a stack of wild-and-wacky articles to your name that are languishing on the shelf, or in a publication somewhere? (Tell us in strictest blogosphere confidence, of course!)

This entry was posted in CentreStage and tagged CentreStage, Gypsies Stop tHere, Interview, loveahappyending.com, Miriam Wakerly, No Gypsies Served, Shades of Appley Green. Bookmark the permalink.

15 responses to “CentreStage with Miriam Wakerly: Writing with a difference since she was eight…”