Publishing a book is like giving birth. It’s a long time coming, it involves a whole lot of blood, sweat, and tears, and the euphoria when you finally hold your baby in your hands is second to none.

I gave ‘real’ birth twice, to two wonderful little boys. But this is my FIFTH book baby, and the emotion, excitement and pride are every bit as intense as they were for the previous four book births and their real life flesh-and-blood-baby counterparts.

I write romance with rock stars, and here’s your latest fix:

Fallen for Rock: Out today!

‘A thrilling and delicious story of love and self-discovery woven around a broken romance that will make you turn page after page and cheer to the end.’

Love, life, loyalties. Nothing stays the same when Emily gets drawn into the world of rock.

Glossy and sophisticated professional high-flyer Emily has no time for nonsense such as the rock music her ex-boyfriend Nate adored so much. Yet when she unexpectedly comes into possession of VIP tickets—access all areas—for new rock band phenomenon, MonX, she can’t resist the temptation.

The fateful gig turns into more than one night, and Emily finds herself strangely drawn to this new and unfamiliar glittery world. However, only weeks later, MonX and her own universe fall apart with devastating consequences for all. When MonX lead singer Mike appeals for her help, she reluctantly embraces a new opportunity. But she soon discovers that while she may be a rock chick after all, a groupie she is not… Or is she?

Just exactly where do her loyalties lie? And what direction will her life take now that she’s left behind everything she treasured?

Warning! Fallen For Rock contains some explicit content and strong language that may not be suitable for readers under eighteen years of age.

Join me today, 30 June 2014, on Facebook and Twitter for all-day launch festivities including games, music, flash giveaways, and virtual food and drink.

To celebrate the launch of Fallen for Rock and to spread some joy, I’m giving away the following items:

One Large Signed Poster of “Fallen for Rock”

One Set of “The Complete Nicky Wells Swag” (signed): Bookmarks and postcards for Sophie’s Turn, Sophie’s Run, Sophie’s Encore, Spirits of Christmas and Fallen for Rock

One Amazon Gift Certificate for £5/$7 or equivalent 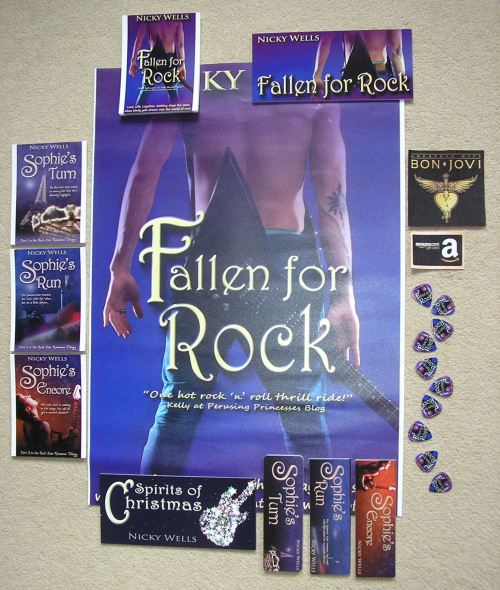 The Small Print: Giveaway is open internationally. Giveaway entrants must be aged 18 or over. Giveaway closes at midnight on 14 August 2014. Winners will be notified by email.

I write romance with rock stars. I know all about touring. Of course I’m taking this release on tour! Here’s a list of all the wonderful blogs that will be hosting Fallen for Rock with reviews, guest posts and/or interviews over the coming weeks. Give these bloggers a big round of applause when you stop by there: they are truly amazing, and I couldn’t do what I do without their support.

Have you Fallen for Rock yet?

21 responses to “Congratulations~It’s a book!”