Next week marks the beginning of the Advent season, the countdown of the last four Sundays before Christmas. I grew up with the German tradition of lighting a candle on an ‘Advent wreath’ on each of these Sundays until all four candles would be lit. The lighting ceremony usually involved a darkened room, Christmas carols, hot chocolate, and biscuits, and this really ‘made’ the season for me as a child.

I’ve continued this custom here in the UK with the help of a genuine, bona-fide Advent wreath made by the good people in the Harzgebirge (a region famous for making Christmas decorations) and exported to London. I purchased that wreath some sixteen years ago in a bucket shop selling cheapie TVs (probably off the back of a lorry! Goodness knows what possessed the owner to stock Advent wreaths as well unless… they fell off the back… ah, never mind, better not ask) on the Tottenham Court Road.

I’ll never forget the day, simply because I was so delighted with my find. It was a Friday, and it was pouring with rain. I was on my way home from work, en route from Piccadilly (whence the office was based) to my shared flat in Covent Garden via Tottenham Court Road and the local supermarket. It was pouring with rain and for some reason, a display in the back of that particular store caught my eye. I couldn’t quite believe it: Advent wreaths, in a TV shop. The real thing! Complete with candles! Only in London, right?

I stormed in, expecting the treasure to be ludicrously expensive and thus out of my financial reach but oh, oh! It was only £3.00. Yes. Three pounds. THREE! Needless to say, I bought one, even though perhaps it wasn’t completely to my taste. But that didn’t matter, it was the real thing, and it would light my days.

I knew that I would be spending Christmas in London in my dismal shared flat, although not entirely alone because two friends (yes, that would be you, Karen McL and Patricia O!) were also ‘stuck’ in Blighty, and we had decided to have a jolly Christmas together, us three expats. And the wreath… well, it doubled as a Christmas tree.

Last year’s wreath in its full (and final) glory….

Since then, the wreath has come out every year to brighten the season. It moved house with me, and later my husband and kids, no less than a dozen times!

However…. Sixteen years later, I have to confess, I grew a little tired of the battered old pine cones and tacky bows. This past weekend, my hubs, the kids and I embarked on a restoration project to breathe a new lease of life into this wreath. Okay, I admit it: we tried on numerous occasions to replace it; we even placed an order with a local florist three times to get a ‘real’ wreath, but all efforts failed. So this year… we’ve made it happen on our terms. What do you think? 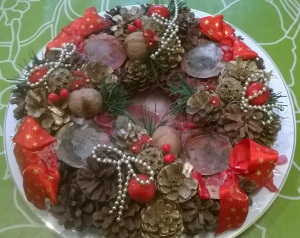 In the harsh day of light… the old wreath looked a bit tired and dated.

The most painful part of the operation done: gone are the bows and some of the worst cones. Stripped, bare, ready for makeover!

Ingredient 3: Holly. Let there be holly!

Do you have any Christmassy traditions from your childhood that you cling to, come what may?

This entry was posted in Miscellaneous and tagged Advent, Candles, Christmas. Bookmark the permalink.