Write what you know, right? Well, I recorded a single once!

It’s no secret I love my rock music. But did you know I had a go at making a record…well, recording a single, once?

In May 2010, a fabulous group of choir friends decided to make a very unique wedding gift for one of our tenors. A suitable rock song sprang to my mind, and I adapted the lyrics to suit the happy couple. Someone located the backing track for the song, and we were all systems go. Before anyone could chicken out, I booked us into The London Recording Studios (aka Brick Lane Studios ~ the very place were Queen recorded Bohemian Rhapsody!) for an entire Sunday, and off we went recording, kids, husband and all in my case.

We arrived at 10 a.m. to meet with the sound engineer and concoct an action plan. Owing to a rather wide geographic dispersion, we hadn’t had time to come together for an advance practice. We were simply going to take our respective lines and… wing it.

The first attempt wasn’t great. We gathered round and had a go at belting the song out. The sound man looked somewhat dismayed but put on a brave face. Undaunted, we took a half hour to regroup and practice. Our second attempt was more promising, and the sound man came into his own. He suggested an iterative approach to laying down the track and became our quasi-director/producer.

The next step was individual recording of individual lines. Uh-huh, you read that right. The studio emptied as everyone quickly filed out, leaving me holding the music and evidently having the first go. Well, the whole thing was my idea…Gulp. 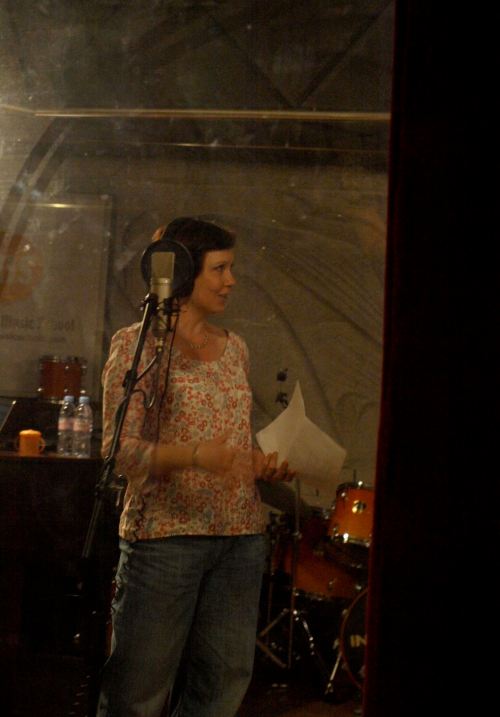 What, really? You’re all leaving me here to go first?

Recording individual lines was a weird and wonderful experience. The sound man played me the song ‘so far’ through the head phones, and I had to erupt into song at the right moments. As I was first, there were a lot of instrumentals and no vocals other than the chorus. I had three or four goes at my lines (thoroughly enjoying myself!), and then we swapped to the next person.

*sings* …got his tickets now he’s on his way-ay…

Mixing It Up Before Mixing It Down!

Back in the mixing room, the sound man had the studio sound on speakers, so as the next person recorded her lines, I could hear her, and my lines, and the chorus. And so it went on, bit by bit.

Slides and faders, buttons and dials… and the all-important computer. He seemed to be doing a million things at once ~ it was truly fascinating.

When we were done individually, we trooped in together for more backing tracks and tweaks. At this point, my then five-year-old decided he’d quite like a go, so we let him! He had his own little starring moment in the last chorus.

Oh yeah, he’s having a go! (See that Paddington bear clutched under his arm? That’s for courage!) 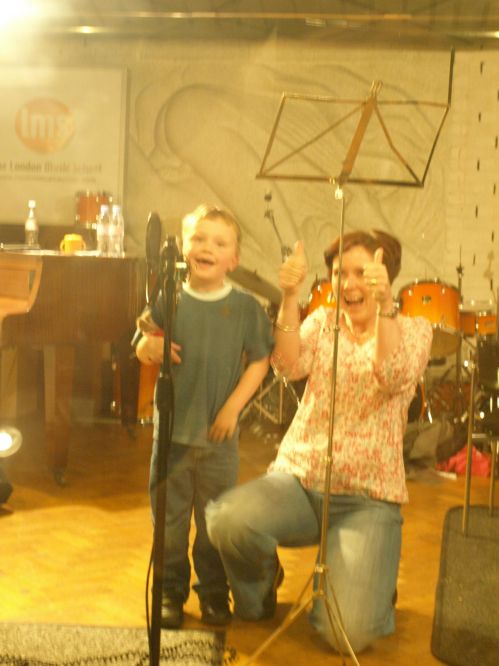 He got the thumbs-up from the sound man… which made me insanely proud. LOL!

After six hours of recording, including an impromptu lunch from the local pizza delivery place (boy, did we feel like the real deal, hanging in the studio with pizza and drinks!), the sound man dismissed us for a couple of hours while he got on with mixing, mastering, and mix-down. When we returned to the studio, the song was as finished as it was going to get after one day’s work with no previous practice. We were mighty pleased!

So… I Wrote What I Knew

The whole experience was exhilarating, exciting and totally mind-blowing. I’d love to play you the result but owing to licensing restrictions on the backing track, I can’t. Maybe one day, I’ll get to make a real single and then you’ll hear all about it, I promise.

So when Sophie suddenly gets to be in the studio with Dan… when she records, and starts mixing… well, let’s just, I’d had a tiny little taste of the action myself, and it inspired me no end. Write what you know, they say…