A Fond Farewell and an Excited Hello: Unveiling the New Look for Sophie’s Turn

It is with a tinge of nostalgia that I am saying good-bye to the original cover for my debut novel, Sophie’s Turn.  Designed and lovingly created by my wonderful husband, it was a true piece of cover art.  It received plenty of praise and served me well.  And yet…  as I became more experienced in all manners relating to independent publishing, I was beginning to realise that the cover needed a little more ‘oomph.’  So my wonderful husband and I, we took stock, and we decided to ramp things up a little.  More glitz and glamour was called for.

Enter my great friend and former work colleague, the one-and-only Jessie Dalrymple.  Based in Washington, D.C., Jessie and I go back quite a long way.  We have spent many a long night editing, proofing and (in Jessie’s case) designing books for publication for the company that we were both working for then.

Jessie decided to brave the chaotic editor-cum-artist person that she knows I am and offered to have a stab at jazzing the cover up.  And of course, it didn’t quite stay as simple as that.  In the end, I gave Jessie a creative carte blanche and star-designer that she is, here is what she came back with: 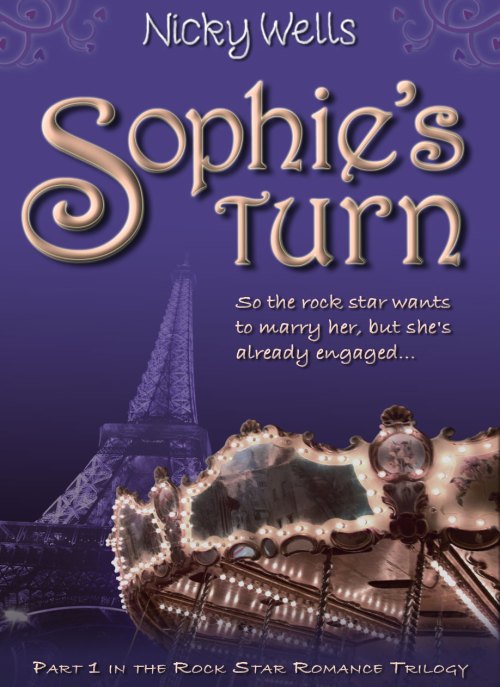 Doesn’t it just take your breath away?  If you’ve already read the book, you will know why this is so perfect.  And if you haven’t… what are you waiting for?  You can get it right here. 🙂

Thank you so very much Jessie!  This is terrific.  Words cannot capture what I feel right now… but the cover couldn’t be better.  Wow!

And here’s the credits:

Cover image, “a carousel and the eiffel tower lit up at night” by www.unrestrictedstock.com, is licensed under a Creative Commons Attribution 3.0 Unported License.

Jessie is usually designing conservative covers for the U.S. Social Security Administration, where she’s a web and print production specialist. She is the current webmaster for their Research, Statistics, and Policy Analysis and Retirement Policy sites – creating publications and tools for social security researchers around the world. When she started at the agency three years ago, she redesigned all of their statistical report covers using her own photos of flags and fellow concert attendees.

Jessie and Nicky first met while developing corporate research publications, full of stick people and process flowcharts. But Jessie was able to break out into the exciting world of textbook publishing for a few years. She composed dozens of textbooks and workbooks for all grade levels and across various subjects: maths, history, reading/language arts, music. (Her favorite, by far, was the introductory music book!)

When Jessie is not hard at work, she is usually playing tennis, cycling, or walking with friends. She’s completed five half-marathons, two triathlons, and several local cycling events. She’s obsessed with genealogy research ever since she found a direct ancestral link to Eleanor of Aquitaine and other fascinating historical people. And, while she doesn’t normally read chick lit, she devoured Sophie’s Turn within 3 days of its initial release on Amazon and is now anxiously awaiting Part 2!”

What can I say?  You rock, Jessie! XX

8 responses to “A Fond Farewell and an Excited Hello: Unveiling the New Look for Sophie’s Turn”