CentreStage showcases fantastic authors from around the world, introducing in particular my fellow featured authors at loveahappyending.com as well as fellow authors in the Sapphire Star Publishing family.  In this new, exciting feature, these authors might write for you about their lives, or their writing journey, or anything else that matters to them.  Every feature will be different in format and flavour, so watch out for a variety of stories and tales.

Today, it is my honour and my pleasure to host a fellow Loveahappyending.com author, namely the one and only Owen Carey Jones!

First of all, let’s have the official low-down on Owen, the author…  Introducing:  Owen Carey Jones 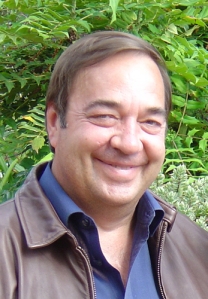 Born in Belize in the Caribbean, Owen Carey Jones is a former banking professional who decided on a change of career at the age of 45 and studied for an MA in Screenwriting (Fiction) at the Northern Film School in Leeds in the UK.

On completion of his Masters degree in 2000, Owen established Carey Films Ltd and went on to become an award winning independent feature film maker whose most recent film was screened in cinemas across the whole of the UK before being taken on by film distributors in both the UK and the USA.

As well as being shown in cinemas, Owen Carey Jones’s films have been seen by more than 40 million people on television in countries on four continents including China and the USA and in 2004, as a result of his work as a film writer, producer and director, he was elected to membership of the British Academy of Film & Television Arts (BAFTA).

Rough Cut is the first novel by Owen Carey Jones but comes after more than ten years of writing the screenplays for his films during which, he says, he has learned a lot about storytelling.

Owen has so far undertaken 21 book signing events for Rough Cut with Waterstones branches around the country and has another nine signings scheduled before the current tour comes to an end. After that, he will be focussing on getting his next feature film through development and into production, hopefully in 2013.

Thank you for introducing yourself!  There’s quite a lot to take in here.  Let’s backtrack a little.  Tell us how you came to be a writer…

Having spent twenty-five years working in financial services, ending up as a publisher of several specialist magazines for the sector, in 1994 I underwent emergency heart surgery (quadruple coronary artery bypass). Three weeks later I was back at work and at my six monthly appointment with the cardiologist was told to stop or I would soon be dead!  I closed down the publishing company the next day and wondered what to do with the rest of my life, quite quickly deciding to do what I had always wanted to do: write. When I had left school with no A-levels (I found school work incredibly boring!), I told my father that I was going to be a poet. Of course he suggested that I get a ‘proper’ job, which I did.  But now, with time on my hands, I decided to write a novel.

That would be Rough Cut, I assume: Wow!  Tell us more about Rough Cut. 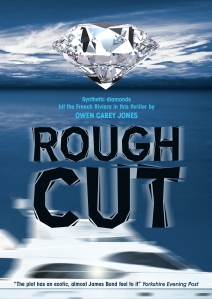 Rough Cut starts when a New York dealer in gemstones discovers a number of top quality synthetic diamonds in a batch he has bought, industry watchdog, the Federation of International Diamond Traders calls in Belizean, Carter Jefferson, to trace their origin.

Carter, a synthetic diamond specialist who recently quit working for the FIDT to concentrate on writing but who still works for them on an ad hoc basis, is reluctant to take the case until he finds a reference in the file which takes him back 25 years to the time when he was a geology student at Oxford University. Old relationships are revived and family secrets emerge as an attractive English girl and a passionate young Frenchman are sucked into the web of deceit and death surrounding the illicit gems.

Owen, what an intriguing story!  And quite an amazing career change from banking to writing: wow!  How did your writing career evolve from there?

After getting professional feedback on the first draft, I realised that if I was serious about writing, I needed to get some education, so I applied to the Northern Film School in Leeds and two years later graduated with an MA in Screenwriting (Fiction). From there, I got involved in directing films and went on to make three feature films which have now been seen in cinemas and on television by more than 40 million people in countries on five continents including the UK, China and the USA.

A double career change with a sideline (or main line?) into film making.  I take my hat off and stand in awe at such determination!  But take us back to the evolution of your masterpiece…

At the beginning of 2010, I decided to rewrite my novel, Rough Cut, which I had been developing as a screenplay over the years, taking into account everything I had learned about story telling in the years that had passed since I first wrote it. When writing, one of the things I learned early on is that it is easier to write about places you know well, so I tend to set my books and screenplays in familiar places and, in the case of Rough Cut, places I have a particular fondness for.

Write what you know; I am certainly familiar with that concept!  How do you fit all your projects and ambitions together?

My current life involves various things, including doing research for international banks (to pay the bills!), developing future film projects, and writing. So writing has to be fitted in around my other activities but I can usually set aside periods of a few weeks when I can concentrate on one specific project, be that a film or a book.

Hee hee, I know what you need… what every writer needs! A spell on a desert island! What would you do, if?

If I were stranded on a desert island, I would be so thrilled to be living near the sea that I wouldn’t really need anything else, but I would probably like to have a book of Times crosswords (and a pen of course!) and a stock of thriller novels (in the vein of John Grisham rather than Kathy Reichs). And I’d make sure my iPod was fully charged up so that I could listen to my collection of music ranging from Sandie Shaw’s 1960s songs through to Diana Vickers’ more recent songs, with some Human League favourites in between. And it would probably be a good idea to have some pads of paper so that  I could carry on writing about my experiences on the island when my laptop ran out of juice!

Fantastic answer!  Owen, it’s been a pleasure to find out the backstory to Rough Cut.  Thank you for visiting CentreStage today and letting us peek behind the scenes.

If you want to find out more about Owen, you can visit his websites featuring Carey Films and Rough Cut.  You can buy Rough Cut on Amazon.co.uk, Amazon.com  or from Waterstones.  Owen is on Twitter and Facebook as well as Facebook fanpages. And, of course, Owen has an author page at Loveahappyending.com.

Now then, my question for YOU, dear reader, is obvious, isn’t it.  What would YOU do if you came into the possession of gems, however illicit or rough cut?