The REAL highlights of my VIRTUAL book launch

It’s just over a week since the launch of Sophie’s Run and I’ve had a little time to catch my breath. It has occurred to me that I enjoyed this second book launch a lot more than my first. Don’t misunderstand me, there was nothing wrong with the launch for Sophie’s Turn, a great time was had by all, the consensus was that it was a rocking party, but. There are a few things I did differently for Sophie’s Run, and they made a huge difference for me.

Making fireworks without seeing the sparkle?

Many authors these days celebrate their book launches online. We use Facebook and Twitter and Goodreads to host our parties, and we have a great time doing so. More importantly, this avenue has the potential to reach thousands of people all over the world.

However, for the author, the event can be a little surreal. There’s so much going on; the Tweets and Facebook comments come flying, you’re glued to the computer for the entire day, barely daring to leave your desk for a toilet break, let alone food. And that’s exhausting. It can feel like you’re creating massive fireworks that you can’t actually see yourself.

The very REAL highlights of my second book launch

So what did I do differently for Sophie’s Run?

I’ve been giving this some thought because the additional things I did weren’t the result of a deliberate strategy. Rather, they were the confluence of all the observation and learning and experience that came to me in the six months between the launches. And here are my three topline thoughts.

Some time in October, I became involved with Siren FM, Lincoln’s first community radio station. Courtesy to the enthusiastic support of the host of the midweek drive show, Alex Lewczuk, I took part in several editions of the show as well as the ‘end of the world’ Mayathon in December. Somewhere along the way, the idea was born that we could celebrate the launch of Sophie’s Run live on air, on the eve of publication. We invited some special guests, we publicized the event ahead of time, and we had a go. It was a new format for the station as well as for me, and we had great fun. To me, that kick-started the launch day proceedings with real fireworks that I could see, feel and–thanks to the podcasts–can still hear today.

Next, I had this idea of inviting readers to a very short ‘quick-fire’ book signing event at my local library on the actual morning of my launch day. I can tell you, when I had to leave my Facebook party, I frankly thought I was mad. I reassured myself that I would be back within the hour to resume my social media partying.

It turned out I was wrong on the timeframe and the madness factor. The event was a huge success, and here’s why. As I had set a half-hour time limit, most people turned up at 10 a.m. on the dot. We had coffee and tea and biscuits, and we chatted. Questions were being asked and before I knew it, there was an animated discussion about what it’s like to be a writer, how writing fits in with being a mum, and more. They asked for a reading; I hadn’t prepared one, but I gave one anyway. Most of my audience bought and walked away with a signed copy of Sophie’s Run. That felt really good. That was real. I had officially launched this book into the world. And ok, it took a little longer than half an hour, but it was worth it!

Chatting with readers all over the world

Last but not least, I took a slightly different approach to my Facebook party. I asked questions. I had some SWAG to give away, and I ran a few little spot-competitions. I got some fantastic discussion strings going, the most popular being my choice of Chinese takeaway for dinner. And when the fun was over, I got to sit down and write to the readers who won prizes. That, too, was real. In fact, that was absolutely amazingly fantastic. 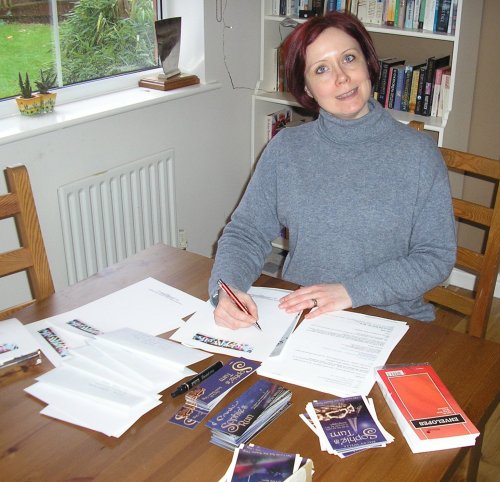 So ~ three real things, quick, short activities that made a tremendous difference to how real my virtual book launch felt. If I may be permitted a soppy moment, I’d like to say that I allowed myself to see my own fireworks, and I enjoyed them!

Was it the perfect book launch? Of course not. There are always things you can do different, things you learn, things you need to change.

How will I approach the book launch for Sophie’s Encore in September, you ask? Will I have another radio party? Frankly, I haven’t got a clue right now. I’m letting this come to me and I’ll see what feels right nearer the time. But I’ll be certain to include things that make the launch ‘real’ for me, and for my readers.

What do you think? Can you see this working for you? How do you make your fireworks sparkle for you?

25 responses to “The REAL highlights of my VIRTUAL book launch”