CentreStage with Robin Leigh Morgan ~ I Kissed A Ghost

Today, it’s my great pleasure to welcome the wholly unique Robin Leigh Morgan to my blog. Robin has put together an interview to tell you all a little more about herself… and an anniversary promotion that she is running for the next three days. Read on to find out more! Robin, the stage is yours….

Let’s begin by you telling us a little about yourself?

Of course, by now you and your readers know I love listening to music. How else would I be able to post my musical responses each week?

I’m a retired NY City employee who’s been married for 20 years today [November 20th] with no children. A few years ago, I stopped writing commentaries for a community newspaper after writing them for over ten years. During this time while I’d been working I also started writing [on/off] an adult Contemporary romance. However, after ten years I still had no success.  It wasn’t until someone suggested I should write for a younger audience that my writing finally blossomed, and I wound up writing my first YA Paranormal/Time Travel/First Kiss romance novel entitled “I Kissed a Ghost.”

Given this week is not only my 20th anniversary, it’s also my OH’s birthday. I’m having a special promotion for the KINDLE edition in the US and the UK through November 23d. In case you’re wondering about my picture, ever since I began making my presence known on the internet I’ve never posted my own picture, and neither has my OH; mostly due a sense of wanting some privacy in our lives.

Would you care to leave an excerpt from your novel for my readers?

How did the idea of the story come to you?

To tell the truth, the whole story had been one of pure imagination, as I wrote it, I saw different ways of letting the story develop, and chose one which I felt could be built upon. In the beginning I did have a skeleton of an outline for the storyline and nothing more. 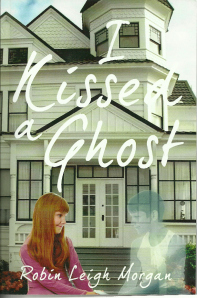 When it comes to your writing, do you consider yourself to be a plotter or a pantser?

I’d probably say a little of both. As I said in the above, I made a skeleton of an outside, writing down the basic plot points I’d like to hit as the story unfolded; and as a sculptor starting with a wire base of what they’d like to have, I added material, then took some away, until I had the finished product I had in mind.

Titles are at times more difficult to come up with than the actual writing of the book itself. How did you come up with yours?

Selecting a title for a book had been a very challenging experience for me; but after racking my brain over it, I decided to merely summarize the premise for the entire story in as few words as possible until I had something which could be used as the title for my book. Hence, since the story is about a girl [Mary] and her kissing the ghost [George] she had living in her house; the story had to be called, “I Kissed a Ghost.”

What is your current writing endeavor?

It’s actually the adult contemporary romance I’d started years ago with a paranormal element that runs through parts of the storyline.  With all the experience I’ve gained writing “I Kissed a Ghost,” I’ve chosen to write it anew from the beginning. And this time around I’m finding it a lot easier than the first time.

Would you care to share an unedited excerpt from your WIP?

I’d be delighted to share unedited one here. In this excerpt Warren Ashton had showed up at Jessica door as she ate her dinner with a letter stating she’s ready to use his services as an architect. In this excerpt we learn something shocking about the letter from William Griffith:

With a melancholic tone in her voice Jessica replied “We’d lived together for two years; but about fourteen months ago, a month before we were to be married, he died.”

Warren couldn’t believe Jessica’s answer and felt compelled to inquire, “Did you just say he died?”

A look of total disbelief and shock came over Warren.

“If he’s dead…then how–then how did I get this letter? And why now, so long after he has died?”

“I’ve received several letters from him since his death, and I’ve stopped trying to figure it out. But there’s one thing which is certain whenever I’ve receive one, something important is about to happen in my life.”

“I guess I must be the next important thing in your life” replied Warren jokingly, eyeing Jessica as he spoke.

Where else can we find you on the internet?

Nicky, I feel quite honored being allowed to take the Center Stage so your readers can find out more about me and my debut YA Paranormal romance novel.  THANKS for having me.  I await the comments and questions of your readers.

And no I haven’t forgotten to post a musical selection here, I only do responses, I don’t instigate them.  🙂

Wow! Congratulations on your 20-year anniversary, Robin, what a big day for you! Thank you for taking the time to visit here today and for sharing the joy with my readers by way of a special promo. Rock on! Wishing you best of luck for the next 20 years and the next 20 books…. 🙂

This entry was posted in CentreStage and tagged CentreStage, I Kissed A Ghost, Robin Leigh Morgan, YA Paranormal Romance. Bookmark the permalink.