Posted on March 8, 2013 | 32 Comments
In this post: how I improved my writing process; and what’s next for Nicky Wells, author

It’s done! Oh yes, the first draft of Sophie’s Encore is finished. It came in at just over 105,000 words and I am pleased with it. It made me laugh, and cry, and bite my nails. 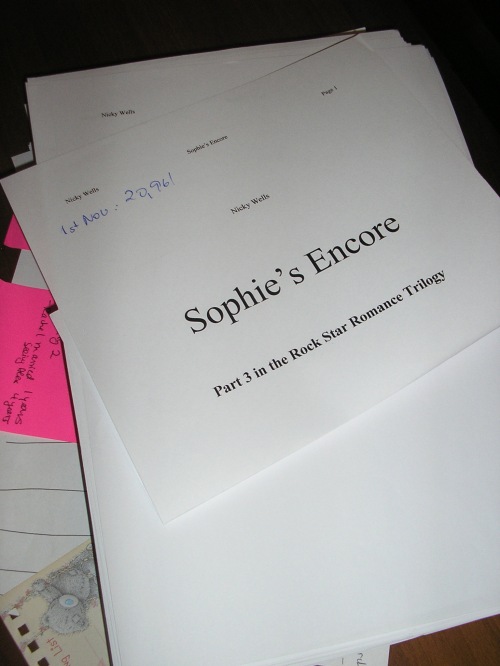 It was quite a different writing experience…

Unlike Sophie’s Turn and Sophie’s Run, which were both written in a mad, continuous and single-minded frenzy, Sophie’s Encore was written in small, deliberate instalments. If you added all the time together, you’d find that it probably took me about twelve weeks to write this third book. However, the twelve weeks were spread out over almost five months because there were several other authorly activities that required my attention.

First and foremost, the beginning of writing Sophie’s Encore overlapped with the book launch for Sophie’s Turn, book 1. I spent a significant amount of time promoting my first baby and keeping up with the book tour.

Next, writing Sophie’s Encore also clashed with the editing process for Sophie’s Run. I had a three-week break from writing in November while I took care of publisher edits for book 2; and then another two-week break in December for proofing and final formatting of ditto. Add to that the Christmas festivities, and you won’t be surprised that I didn’t touch the manuscript for Sophie’s Encore at all in December.

And lastly, of course, there was the launch of Sophie’s Run which coincided with the very end of the writing process of Sophie’s Encore. Talk about multi-tasking!

And yet, Sophie’s Encore got done, and ahead of my own personal schedule too. How so?

Two reasons, I think. One is that the frequent breaks and smaller writing instalments actually made for better writing, or at the very least for a better writing experience. I came back refreshed and eager to the manuscript every day; and after the longer breaks, I took the time to re-read the entire work before continuing it, pressure-testing it ‘real-time’. This meant that I had a much greater confidence in what I had already produced, and also afforded me the opportunity of doing a little bit of pre-editing here or there.

Which leads me to the second reason. Having had the benefit of two extensive editing processes through Sapphire Star Publishing also improved the writing process for Sophie’s Encore. Let me remind you that the first draft of my second book, Sophie’s Run, came in at nearly 150,000 words ~ requiring a good 45,000 words to be chopped by me personally before publisher edits and eventual publication. I learned my lesson, but I didn’t notice until I started writing book 3.

Everything I chopped out of book 2 (and book 1 before that) involved amusing episodes or back story that I enjoyed writing but that, in hindsight, didn’t advance the plot. What’s more, I probably knew that even while I was writing them because I got a kind of…impatient buzz from them. A kind of, move-on-and-hurry-up buzz, only I didn’t know what it meant at the time.

With Sophie’s Encore, I did. The first time I found myself writing something that gave me that kind of…nice-but-not-relevant feeling, I stopped. I re-read. I listened to my heart. I thought of the editing process. And I chopped the section out right away.

It’s incredibly hard to gauge this but I think I figured it out. When I re-read the manuscript after my breaks, I whizzed through it with barely an itch for the red pen. My famous ‘Queen of Hearts’ internal editor remained silent.

Of course I’m not deluded enough to believe I have produced the perfect manuscript. In fact, I am quite certain that it’ll require some significant polishing to bring you the very best I have to offer. But I do think it’s the best first draft I have yet produced. Surely that counts! 🙂

Well, right now, I am spring cleaning! I kid you not. I have given myself a couple of weeks off writing, or thinking about writing, while I let my mind come to a rest and give myself distance from the manuscript. To me, that’s a critical part of the process. 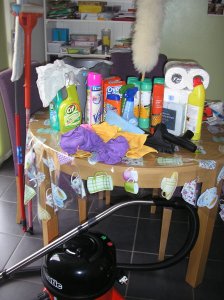 LOL, you know me ~ I don’t do anything by halves!

And when I’m done with spring cleaning, I’ll get planning book 4. Of course. You didn’t think you’d heard the last of me after Sophie’s Encore, did you? Book 4 will be an entirely new story with new characters and I’ll tell you more about that…nearer the time.

In April, I will take Sophie’s Encore through a first round of author edits, incorporating the feedback of my beta-readers who are busy reading as I write this blog post. I love you, ladies, and I trust you with my baby! Over the summer, Sophie’s Encore will undergo publisher edits and then….before you know it… It will be launch day. 5 September!

See that small pile on the left? That’s Sophie’s Encore today. By the time Sapphire and I are done with the editing, the pile will probably be as big as the one next to it which…yes, you guessed it, is the complete round of edits and proofs for Sophie’s Run. Who says us writers aren’t busy?

When can I tell you more about Sophie’s Encore?

Patience, my friends, patience. I will keep you posted, I promise. Sophie’s RUN is only just out ~ let me share the joy of book 2 with the world before I move onto shouting about book 3. I promise you’ll be the first to know. There’ll be a cover reveal at some point, and I’ll post a synopsis and who knows… I’ll probably share an excerpt ahead of time too. Watch this space!