In the name of research… I’ll even eat oysters.

It’s no secret that I love sea food of almost all kinds. So do my leading ladies. Sophie is quite famous for her addiction to all things prawn and lobster. However, there was a gap in my seafood repertoire. Or my mollusc repertoire, to be precise. Oysters.

I’ve always fancied the idea of oysters, but I’d never gotten round to trying any. And then I started overthinking the whole thing and decided I could live quite well without. Until, that was, I put oysters into Alex and Casey’s mouths:

That’ll teach me not to try.’ Alex felt stupid for a moment, but then he succumbed to the funny side.

‘I haven’t had woman yet,’ he gulped. ‘Gosh, what must he be thinking?’

As if on cue, the waiter reappeared. He set down a large plate of fresh oysters on the table and smiled widely.

‘On the ‘ouse. For the ‘oney-mooners.’ He turned and spoke directly to Alex. ‘So you can ‘ave woman tonight.’ He placed air quotation marks around “‘ave”. Alex gaped at him open-mouthed while Casey snorted into her napkin once more.

Alex felt heat rising from the tips of his toes right up his body and into his head. His ears burned with embarrassment. It took him several seconds before he could speak.

‘Did he… Did he think… He didn’t think I was asking for an aphrodisiac, did he?’

Casey lifted her shoulders. She reached across the table to squeeze his hand. ‘I wouldn’t worry about it.’ She dropped her voice to a whisper. ‘Maybe you’ve inadvertently hit on the secret phrase to get free oysters in this place.’

‘Shh,’ Casey admonished him. ‘Now you’re being rude.’ She gave his hand a final stroke before she released her grip and sat back. Tentatively, she poked at one of the oysters with an index finger. The slimy centre of the mollusc quivered at her touch, and Casey yelped softly. ‘Eurgh! How can people eat these?’

So during a recent family holiday to France, I bit the proverbial bullet and had a go. It helped that we found ourselves with some very good French friends in Arcachon, the very oyster capital of France. Here goes…

Careful now, that knife is sharp. Come on, give it up, you sucker. 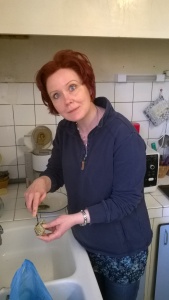 The proof of the oyster is in the eating, yada yada. Ready, steady…

Right. So this goes in my mouth… 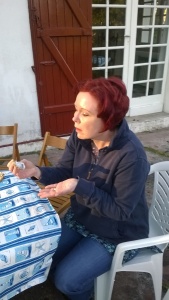 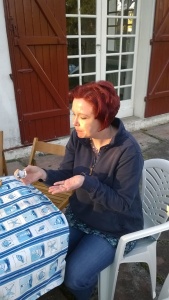 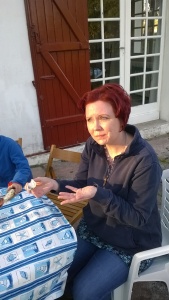 …and watery, but not necessarily unpleasant…

I survived! I didn’t shuck-them-up. And I didn’t end up in hospital, contrary to hubs’ dire prediction.

Would I eat them again? Sure! Would they be my first choice? Err… no. And what did I really think? Well, I put those words straight in Casey’s mouth, so you can find out for yourself…

Have you ever tried oysters? What did you think?